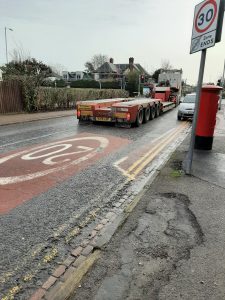 Speeding lorries and the poor condition of Arbury Road has resulted in many of you experiencing disturbing structural vibrations in your homes, particularly in the early hours of the morning. Have you experienced this? Are you worried by structural problems?

We believe a 7.5 ton restriction should be put in place to prevent large lorries from using the eastern end of Arbury Road where it is narrow and the pavements offer little protection to pedestrians.  These lorries also endanger cyclists and obstruct cars travelling in the opposite direction. Such a restriction would match that on Union Lane and force large lorries to use wider and safer routes into Cambridge – as intended by the A14 signage. Currently cyclists are routinely forced off the road.

Please let us know if you have experienced shaking and please report it to the Council using this link: